An Intramural Baskeball Season To Remember For Team LeagueApps

Our newest partnership specialist JD Crabtree shared his prose on our recent undefeated basketball season. It was so good (the season and his write-up) that we’re posting it here for all the world to see. Yes, we are humble bragging…even though we competed in the JV league! 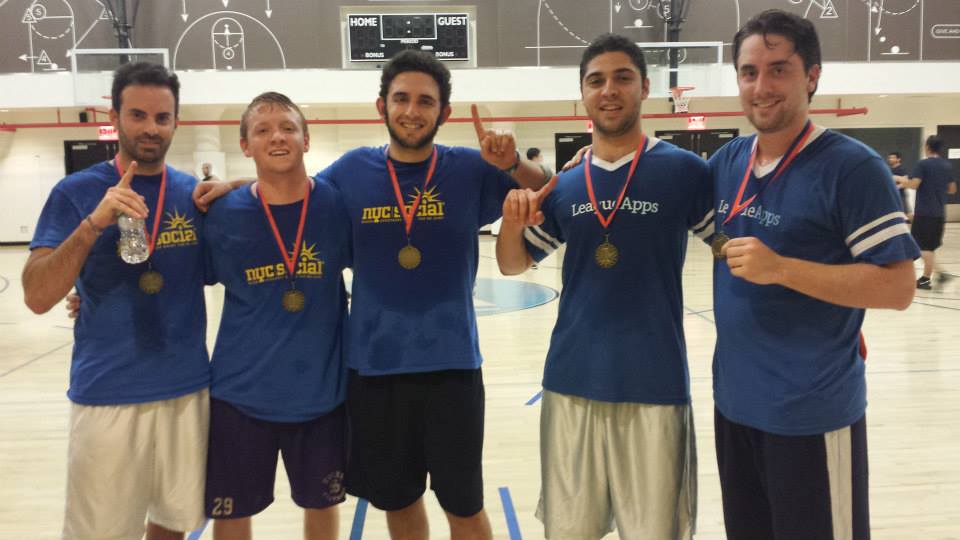 Now there is another team that has entered the Valhalla of sports immortality, LeagueApps: The 2013 NYC Social Sports Club Wednesday Intramural Basketball Champions.

A quick overview of the season does not do this team’s journey justice, but it will display the dominance to be had throughout this o so legendary fall. Outscoring their opponents 358 – 256, LeagueApps tore through the competition to a perfect 8-0 season. Out of the 288 minutes played, they only trailed in 2 mere minutes during the opening of the fourth game.

Similar to a J.R. Tolkien masterpiece, this interesting assortment of athletes took on all types of characters and obstructions along their journey. They dealt with sluggish ogres who tried to use brute strength and size to push around the startup squadron. They fended off psychotic point guards that put in more effort after the whistle than during it. Full court presses came constantly at LeagueApps when the bench was scarce. Most games the team had zero preparation before the skirmishes and the opening tip would be the first interaction with the ball. Some would even say that our favorite referee was a siren in theory, as multiple members battled for her attention on and off the court. Regardless of these obstacles, the LeagueApps tribe traveled back home in sweat-filled cabs victorious each time.

This was a season that will be contributed to a team that embodies the LeagueApps culture of transparency, grit, and synergy. It couldn’t have been done without the utilization of each other’s skills and resiliency to stick to our game plan. There were the late game heroics of Adam ‘Hokey Pokey Hoboken’ Galperin in game 6 when he put an end to the opposition’s run with four straight deep jumpers, another closed deal. Rohit’s appearance before his injury provided a spark with great impersonations of Michael Jordan foul-line dunks, but more importantly a tenacious effort on both ends of the court. Jeff Maier confidently answered the call (very similar to our interactions with him at work) in his one game, putting up a MVP-like performance that entailed leading the team in all statistical categories. Asaf and Ess were never in the direct spotlight, but were undoubtedly the core of the team. They threw their bodies around, became the top rebounders and low-post defenders, and made sure everyone on the court knew the support line was closed for the evening. In every competitive team sport you always need to have that deep threat or that striker that can change the momentum of the game at any moment. Chad cemented his Nike’s in that role early on during this season. His long-range assault of deep 2’s and 3’s were put up at an unprecedented percentage and left defenses scrambling to find him in the perimeters of the court. Michael Bindelglass, aka the match-up nightmare, took on about every role one could ask out of a player. Playing the true definition of a point-forward Bindelton took on much of the scoring load, matched up on their big men often, and orchestrated the offense at times. His speed in the open court and physical play down low always presented a match-up that the other teams simply never had an answer for. It is safe to say J.D. has wanted posters across town with his behind the scenes trash talk and pesky point guard play.

However, Every great team must have a leader that brings the troops together; thus enters Darren Russek. A fine example of composure, the captain never became flustered and used his silky skills in charisma and basketball to bring this whole ragtag group together. The management team of Brian and Jeremy knew they had pieced together a championship team and simply stepped back and let their prized players take care of the rest.

LeagueApps even made sure to collect some spirit points along the way and realized that Champions are about more than just hollow trophies and awards. LeagueApps went for the real gold and they knew it was theirs from day one!

The LeagueApps Service Experience: What To Expect When You Partner With LeagueApps